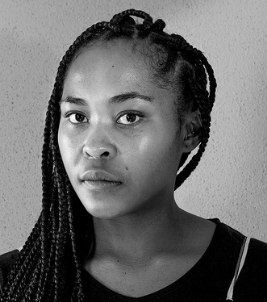 Buhlebezwe Siwani is a visual artist working in performance, photography, sculpture and installation. Siwani completed her BAFA(Hons) at the Wits School of Arts in Johannesburg in 2011 and her MFA at the Michealis School of Fine Arts in 2015.

Thematically, Siwani’s work interrogates the patriarchal framing of the black female body and black female experience within the South African context. As an initiated sangoma, Siwani has also used her artistic practice to delve into religious subjects and the often perplexing relationship between Christianity and African spirituality.

In addition to her independent practice, Siwani is one of the founding members of the influential collective iQhiya, which was formed as an activist response to the lack of exhibition opportunity and under-representation of black female artists in the South African art world.