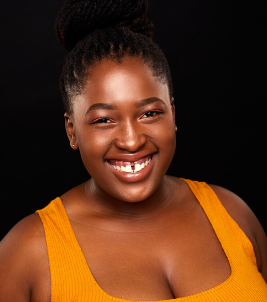 Tankiso Mamabolo is a multi award-winning actor, composer, singer, writer and dancer from Mthatha in the Eastern Cape. She graduated from UCT in 2015 with a BA (Hons) in Theatre and Performance. She has performed in a multitude of successful productions including John Kani’s Nothing But theTruth, directed by Kani himself. Tankiso co-wrote and performed in the award-winning play The Fall, which toured to over five countries receiving the honour of being included in the New York Times critics’ choice list, the Fleur Du Cap Encore Award in 2016 and a nomination for a Naledi Theatre award in 2018. Tankiso has also earned a Fleur Du Cap nomination for best supporting actress and a Naledi award nomination under the same category for her portrayal of Lydia in Marc Lottering’s Aunty Merle the Musical. Tankiso is also a musician recently producing and performing a critically acclaimed musical show titled Tankiso Live consisting of original works at the Baxter theatre. Tankiso has also released her first album titled Freedom Hurts Sometimes to positive reviews.