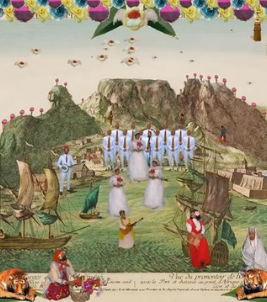 I grew up understanding the old ‘Malay’ word KASSARAM to mean a big ‘mess’, or things being ‘out of place’ or ‘upside down’.  I am from a community whose ancestry traces the forced migration of European Colonial trade routes between Africa and Asia. We are quite simply and unjustly described as the descendants of Indonesians brought to the Cape; as the Cape Malays.

The ‘mess’ begins when one realizes that as much as you can trace your ancestry to Indonesia, you can undoubtedly do the same for many other countries housing the Indigenous people of the Cape. The second part of this migration, however, does not form part of our cultural identity as we have been deliberately orientalized to erase all African heritage within us; permanently concretizing ourselves as the Other.

This film interrogates the artistic strategies used by European Colonial forces to create and impose the positioning of people in South Africa’s society.