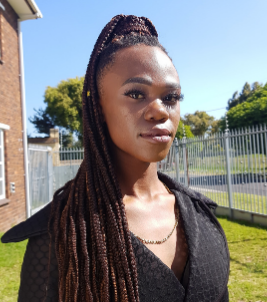 Fleur Du Cap Award winner Lukhanyiso Skosana is an actress, performance artist, vocalist/composer and theatre-maker. A UCT graduate, she holds an Advanced Diploma in Theatre. She is trained in classical music and a variety of theatrical styles. Fitzmaurice voice-work, the Sanskrit system of rasa, body mapping and free writing are the foundation of her practice, under the guidance of Dr Sara Matchett.

As an actress, she worked on the production of Love like Blue directed by Puleng Lange Stewart (2016), and a production that influenced her spiritual awakening as a performer was Nguvu Ya Mbegu directed by Mandla Mbothwe (2017). Bana Ba Mobu choreographed by Tshegofatso Mabutla (2017) was her debut dance performance, followed by Zinyile i’Queers (2018/2019). Lukhanyiso is in the process of touring and reworking the multi-award winning production Womb of Fire/Brandbaar (2017 – present), written and performed by Rehane Abrahams and directed by Sara Matchett, for which she won the 2019 Fleur Du Cap for Best Original Musical Score & Performance.

She performed in the performance art piece Walk in India at the ITFOK festival (2018), NAF (2018) and US Woordfees (2019) curated by Sara Matchett, Genna Gardini and Koleka Putuma. She has also performed at the ICA Live Art Festival (2018) and made her directing as well as playwriting debut with her graduation productions Qamatha and Nazareth in 2019. She was awarded an ICA Online Fellowship in 2020, where she debuted her performance art short-film The Exorcism of Mary Magdalene: A Sexual Resurrection. She also produced the musical score for Isimo and Dwala Lam by Sethembile Msezane (2021).